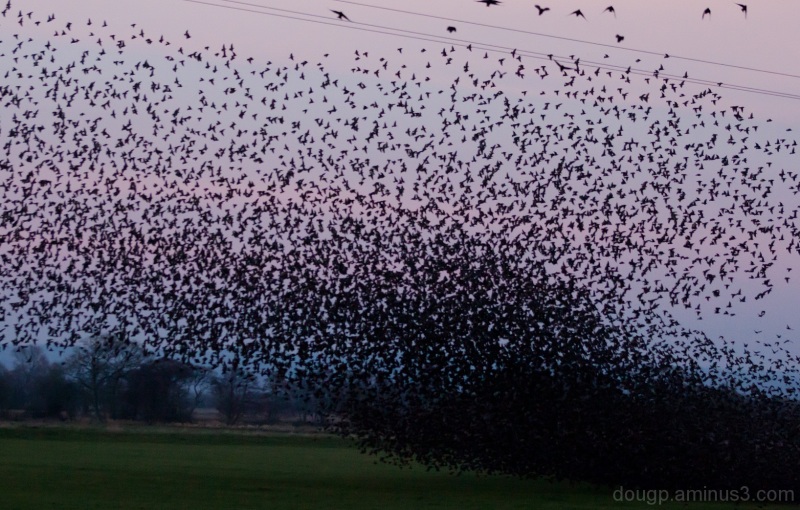 Posted by Doug (Burnham-on-Sea, United Kingdom) on 24 February 2013 in Animal & Insect and Portfolio.

I was travelling home from work and often choose the peat moors between Glastonbury and Burnham, enjoying some of my favourite Somerset scenery and wildlife, also in the hope I might catch the murmeration and on Monday and Tuesday I was lucky to see it.
Just to explain Starling murmurations are where thousands of birds flock together, swirling in the sky at dawn and dusk, hundreds of thousands of starlings darken the sky with these incredible, acrobatic displays on their way to or from their roosts in the reed beds on the moors. The murmerations on the peat moors here in Somerset have been estimated in the past to be over 3 million starlings and this year they seem to be incredibly large.
So I hope you like this series as I try to show your this incredible sight.

They start to move around in formation dancing in the sky like massive shoals of fish.

wow, you certainly were in the right spot to capture these shots - amazing that they don't all crash into each other!

A wonderful series, thanks for showing us these many different views of murmeration.

This is outstanding Doug, gives a real feel for the event, 5* and fingers crossed for a spotlight.

So impressive, a wall of birds.

Wow, thick with them

An incredible shot of the mummerating multitude!

Unbelievable.....hope you have managed to stay out of their flow....

I just love watching them swoop and dive, jerk and turn all in a single, synchronized motion! . This is beautiful, Doug :-)

They seem to be multiplying by the second....another WOW moment.

all looks a bit demonic, Hitchcock-ian even!

That solid mass of birds is remarkable. A super series.

The density of birds is amazing! I imagine it might be frightening to some.

gerard1948 from Somewhere on earth, Spain

This one is very impressive with this big black mass on the bottom right. An excellent composition, I love it.
Have a good evening.

Amazing view of this impressive flock of birds ... Great capture of this interesting event !!!

Wow! That is totally spectacular. It must have been amazing to witness this. Beautiful!

What was said to the crickets.

Ernest Hemingway once wrote, "The world is a fine place and worth fighting for."
I agree with the second part.
:]

It just leaves me speechless.

Congratulations Doug, this is an amazing series of photographs, it is a so well deserved Spotlight :-)

Another brilliant swirling addition to the set - Congrats on the Spotlight, too !

Excellent ! Congratulations on your spotlight !

Congratulations on your spotlight selection Doug! ;-)

Congratulations on your SPOTLIGHT!!!

EXQUISITE!! Hurrah and BIG Congratulations Doug!! I am certainly NOT surprised that you got this MUCH DESERVED Award! My Heartiest congrats to you, sir!!! So proud to say I know you :-)

Congratulations on the Spotlight, fantastic!!

Congratulations on the Spotlight !!!

I'm in awe (and jealous!)- what a privileged sight to see! Congratulations - a well deserved Spotlight! Beautiful!

excellent capture - what a great moment and timing!

Congratulations, Doug ... happy to see this in the Spotlight!

Delighted for you that one of these amazing Murmeration photos won SPOTLIGHT. Congratulations.

Congratulations on the spotlight

Congratulations on your SPOTLIGHT!!!

gerard1948 from Somewhere on earth, Spain

Congratulations for the spotlight.

An Englishman whose photo received a spotlight : who else could give such a dark atmosphere with birds ?
...Daphne du Maurier and her short storie "The Birds"....
Congratulations Doug : more than a photo!

A spectacular capture and must be amazing to see. Congratulations on the Spotlight !

Congratulations on the Spotlight!

Congratulations on spotlight, so well deserved

Congratulations on the Spotlight Doug! Well deserved! I loved this series!