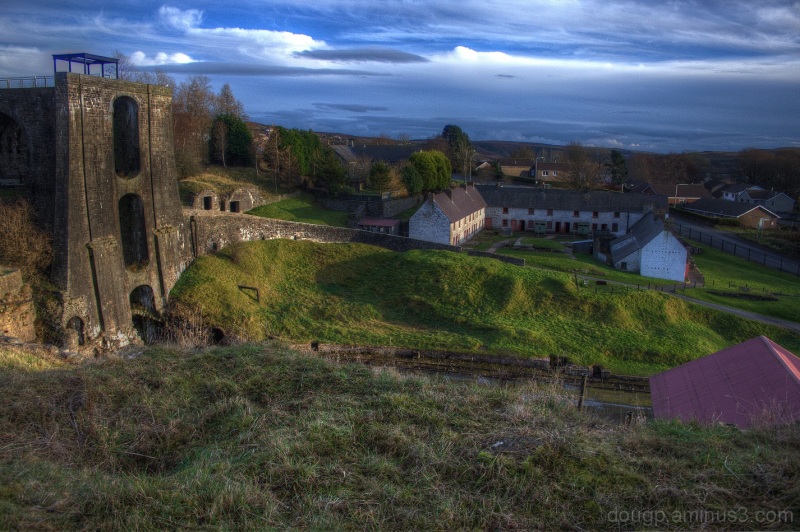 Posted by Doug (Burnham-on-Sea, United Kingdom) on 10 January 2013 in Landscape & Rural and Portfolio.

Blaenavon Ironworks opened in the year 1789, it was constructed with three blast furnaces and employed about three hundred men, many of whom were iron-making experts who travelled with their employers from Staffordshire to help construct the works.

Between 1799 and 1881 the managing director was James Ashwell and the most impressive monument to Ashwell's work at Blaenavon Ironworks is the water balance tower at its northern end (which is on the left of the picture), which was built in 1839. This form of lift technology using water to counter-balance loads was used in the mine shafts of south east Wales and at several ironworks. Blaenavon water balance tower is the best preserved example.

Superb composition - wonderful sense of history. Excellent work with the HDR as well.

Fabulous HDR, Doug - the colors and light are magnificent.

Fine processing again Doug, all very natural for an HDR.

The processing is spot on-a bit of a lift, but truly nothing obtrusive. Interesting write-up too

You are an expert Doug, this just pops out at me, its stunning.

Excellent Doug !!! Amazing presentation and thank you fo all that info !! I am in awe !!!!

Interesting and informative text to accompany a wonderfully controlled processing for this beautiful scene.

Really well done Doug, and nice to know how you did it, http://www.chunkofcheese.co.uk/ will give you another slant on Blaenafon you may not know. ;>)

What a beautiful countryside, I love your use of hdr processing - I think sometimes the hdr can be a bit over the top, but this is just perfect. It brings out all the right details and colors. Well done!

Nice light on this lovely landscape.

A fine shot of these historic iron works. Interesting shot and fascinating history.

Beautiful photo of this interesting place and great history !!!

Very pleasant with these delicate colors

I don't know what is more fantastic, the construction of the ironworks, or your wonderful image! This could be a old painting.

the pp lived up to the climb!!

A wonderful HDR shot Doug! The light is perfect! ;-)

A brilliant composition with spectacular results - and I just LOVE your text! Thank you so much, Doug :-)

Really beautiful spot for the Ironworks ... gorgeous photo and information!

It seems you have the touch for HDR Doug, this is so striking, that sky is a delight! Great color and detail, very nice!

A beautiful shot of the ironworks. A handheld HDR? Bravo!

That is amazing and pretty awesome to visit! Thanks for sharing a part of the history. I love the glow of sunlight, soft green grassy hills, deep blue sky. Everything. Brilliantly framed and captured!