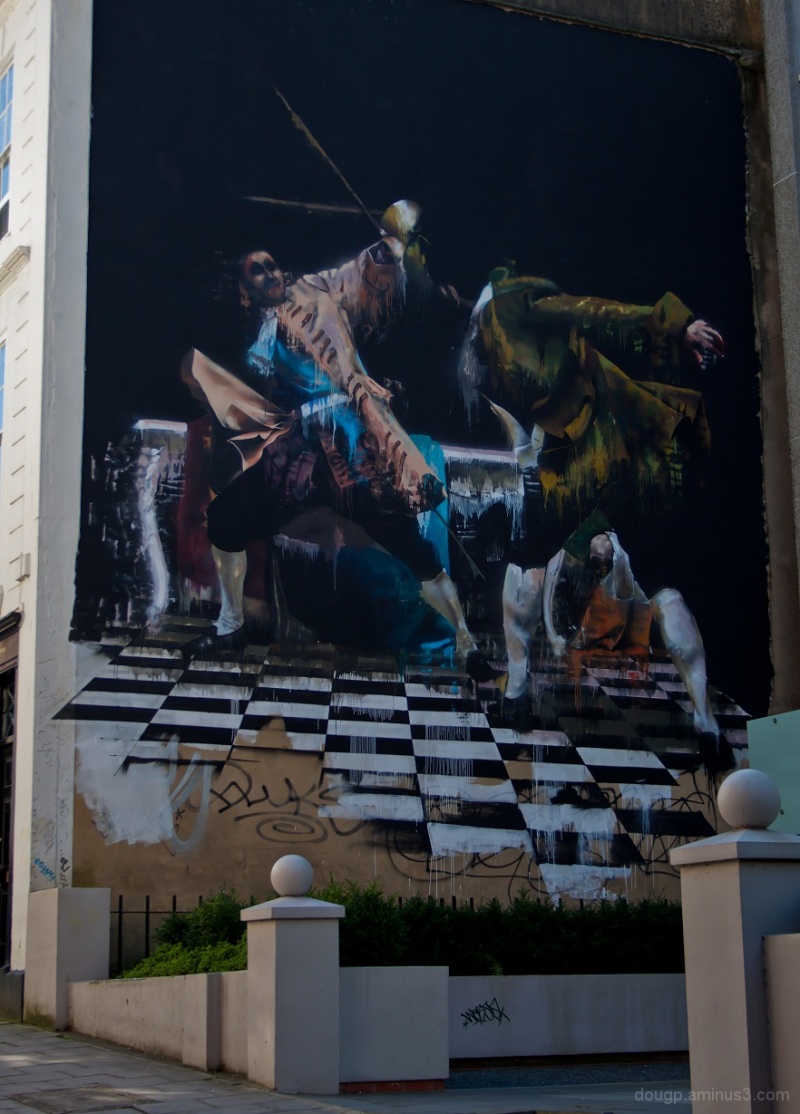 Posted by Doug (Burnham-on-Sea, United Kingdom) on 29 October 2012 in Art & Design and Portfolio.

Nelson Street in Bristol just before the end of the summer. Nelson St was the site chosen by Bristol City Council to sponsor some of the best street artists to come and take part in the See No Evil project. This one's for Grouser and I agree it's a breathtaking piece of art and I don't think this shot really does it justice.

Conor Harrington is one of Ireland’s finest contemporary oil painters, he is also a master of street art, painting huge walls all over Britain, with a big following in Bristol. According to Conor, the male figure is a central theme to his work, and refers to the masculinity of urban culture.The men in Conor’s paintings allude to the stoic and pensive male inspired by the modernist painters. His pieces are plastered with post-modern graffiti combining a pertinent clash of styles and asserting his trademark.
“I’m interested in the dynamics between opposing elements,” says the artist.
Conor’s work is an intelligent and modest reminder of the positive emotional contribution from men in society at a time when political figures and heads of cooperation’s all over the world are being scrutinised and ousted for problems in society. It also shows that graffiti doesn’t have to shock – or convey a dark undertone of bitterness to have necessary substance.

I'm not one to read social politics into works of art, even when the artist insists they are there... but I think this is a masterpiece!

Another stupendous take, really have been enjoying this series, as art it is way better than Christine's photo of Mr Hirst's work

This one was a suprise, it is fantastic and the info with it is great

This is really very sophisticated street art.....has a look of the Spanish masters!!

It is interesting!! Entrance gates are like pawns for chess on the wall.

Fantastic - like a Goya painting! Great shot to show all the drama of this street gallery mural.

This one is a very beautiful painting !!

A wonderful mural ... are you going to show us another with a bit more of its surroundings?

@Judy aka L@dybug: Unfortunately I couldn't keep much of the street in on this one as it was straight into the sun so very blown out, but there's more to come showing the surroundings

yes it was definitely my favourite o the ones there when I visited. Nicely documented, words and picture

What an amazing piece.. great work by the artists (both the painter and photographer)

Extraordinary! Thanks for the explanation friend! Very interesting too ... I'm culturizando through your pictures and documents. Best regards Adela

WOnderful piece of art that you have captured. IN a way it looks kind of ghostly. IN keeping with Halloween

wonderful piece - It would be great if Oxford commissioned a similar project to bring colour to some of the "grey" concrete inside the ring road!

Wonderful wall art and colors; I like the running paint on this art piece ~ very unique !

A superb example of the muralist's art work. Fine shot.

now this painting really is my cup of tea,thanks for sharing !!

Fantastic - has he lost his head?

Fantastic street art. He is really a master. I really appreciated the explanation about his art. Quite interesting.

Wonderful painting, I love this !!

What a wonderfull wall painting , thanks for sharing !

A magnificent perspective and setting, Doug! Wonderful writeup as well, which tells me all sorts of things that I was unaware of ;-) This is just a magnificent piece in every respect! Sorry I have not been able to comment much,,the work has just been rediculous!! Wishing you all the best!

i find these murals quite attractive and attention catching. definitely a mark-up for the houses and streets ...

A very cool painting again, but then idiots below have graffiti it, that's what I hate about street art. Shame.

Amazing, I thought it was a painting, but as I scrolled down to find street, wow

This really is art and deserves to be up high, great shot.

Is this not amazing what they can do on such a large canvas? Well Done and Thx Dan.

Stu from From Scotland | Living in 京都 Kyoto, Japan

This is stunning, your image and the mural. I have a soft spot for murals.
Thanks for the interesting info.

I love that. Awesome capture of this fantasy on the wall.

Wow, this is really an amazing piece of art.

Now that is talent what an amazing mural

this is wonderful, sure beats the juvenile scribble under it.

Is he headless? Interesting because the black and white checked floor symbolizes the intellect in art, and it dominates and is a contrast here. The colorful brushy action of the figures is intriguing and literally dripping in feeling. Perhaps indicating the presence of a suppressed feminine or distorted one. Because, surprisingly,... the feminine is in man, and the masquiline is in woman. But his statements are about the male dilemma. I find this really great art statement. My take. I wonder what the artist intends with it.