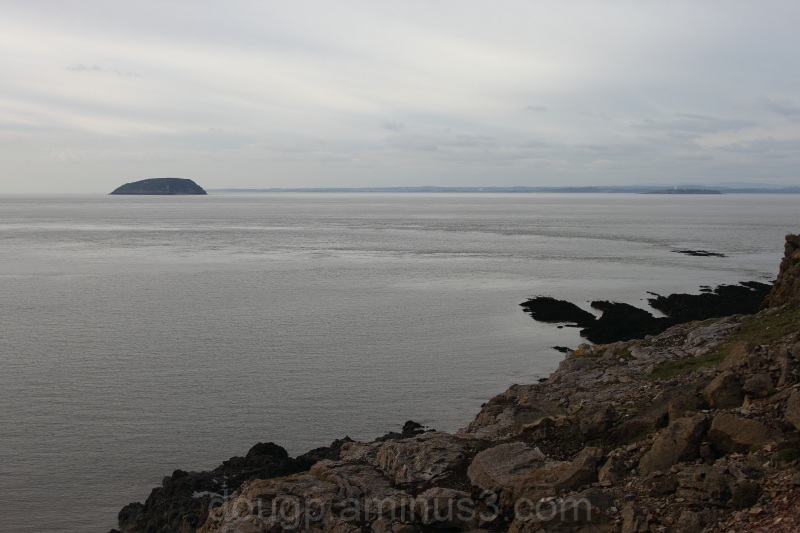 Posted by Doug (Burnham-on-Sea, United Kingdom) on 3 February 2012 in Landscape & Rural and Portfolio.

Looking across the Bristol Channel from the end of Brean Down, the island to the left is Steep Holm and the one to the right is Flat Holm, in the distance you can just make out the coast of South Wales.
Along with Brean Down both Steep Holm and Flat Holm were fortified in the 1860s as a defence against invasion. They form part of a line of defences, known as Palmerston Forts, built across the channel to protect the approaches to Bristol and Cardiff and later used again during WW2 as a defence.
Steep Holm is now owned by a Trust set up in the memory of naturalist Kenneth Allsop who preserve the island as a nature reserve.
Flat Holm is managed by Cardiff Council and also is a Nature reserve and sight of special scientific interest, with rare flora and fauna.

I like the composition with the horizontal divide of the rocks against the mass of beach sand.

The sea is cold and beauty.

fantastic view over the channel - well composed and captured

Nice view over the sea in a winter mood...

Looks like a grey old day - nice frame though.

I like the composition.
A nice view over the sea.
Thank you for the very interesting information.

The sombre tones add their weight to this . . a lovely composition.

Love the softness in here.

Superb composition and lovely seascape in this soft light.

thank you for the info - typical british grey day

a great shot and fantastic history info - thanks! It reminds me a lot of Bass Rock in Scotland.......

A wonderful view with some fascinating information to put it into context! Well done Doug! ;-)

Great pov and your frame is very effective for the information you provided, fantastic shot and history!

Enjoy your historical picture tour. Very nice to know that places are kept as Reserves, and protected. In this image the areas of dark rock (?) along the edge of the silery calm sea, are intriguing and effective punctuation in the composition. You seem to have a good eye for balance of the contrasting elements of land and sea in your images. They are as yin yang symbols for that reason.

Yes, I really like and appreciate the text, Doug - great job..Have you ever been out to the islands? This is a fantastic image by the way sir! Have a wonderful weekend!!

Rugged and beautiful in equal measure. A fine image to spend some time with, and the text is informative and a great enhancement to the shot. Thanks!

Lovely composition! I love the vast expanse of water leading to the island! It does look like rather rugged and lonely country!

An interesting coastal shot. These islands seem to make one want boat out to check them out. Fine image.

Steep Holm nature reserve, wow what a beautiful place that I hope to visit someday.

Thx for introducing me to a new world, with your words and through your eyes.

A nice view over the sea and that island
Lovely shot Doug
:)

From this view and with the cloud cover, the channel looks so vast. Beautiful composition and very interesting information.