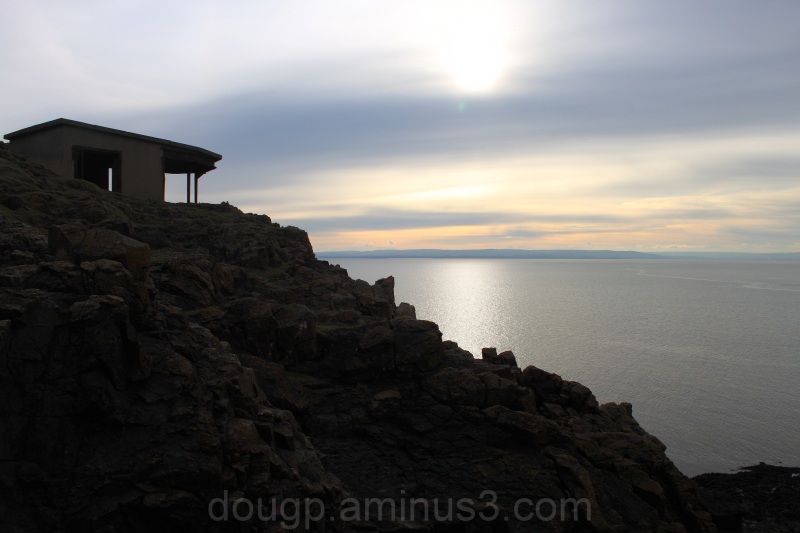 Posted by Doug (Burnham-on-Sea, United Kingdom) on 2 February 2012 in Landscape & Rural and Portfolio.

A few shot's of Brean Down, just a few miles down the road from where I live. It's a rocky promontory jutting out into the sea at the river Severn estuary it rises approximately 100 metres above sea level and is around 1.5 miles long. At the end of the Down a fort exists that was completed in 1870 to protect the Bristol channel from possible invasion by French forces during the reign of Napoleon III. Although there was never a shot fired in anger the fort housed some formidable guns, although unfortunately they no longer remain. During the World War 2 it was home to troops who manned the fort to protect allied shipping coming up the channel and in case of invasion.

To the left in this shot is one of the WW2 observation posts and gun emplacements which looked out over the Burnham-on-Sea side of the Down across Bridgewater Bay and out toward the sea.

You are so lucky to live with such history. Very cool.

What a high place! very nice!

A little lonely looking place. The views are superb.

I love the sense of stillness you have captured here

Bags of history and a great view,who could want more ?

Beautiful photo ! Wonderful color and light at the horizon !

Interesting history and now a much more peaceful view! Lovely composition and superb capture of the light.

Fantastic place, I can imagine crawling the rocks if I was a kid, trying to reclaim the
fort for myself, fantastic photo, beautiful vantage point.

The encampment looks good against the sky. Beautiful reflections.

Some of these old OPs and pill boxes are virtually indestructible, solid concrete that nobody knows what to do with these days. Still, you create a very calm and peaceful mood in this setting.

Wow, what a wonderful place to live near! The water is just beautiful. The color and the calmness.

So beautiful this light!

Nice light shinning on the water. It's glowing.

Looks a great place to go for a wander with the camera, very nice shot

You can imagine Dad's army sitting there, looking out, always vigilent

Beautiful photo with the rigid rich colored rocks against the soft colored sky and sea.

Love The Shot, And History

I have something that I am going to try; it’s about a ranch where I live. You will see, and I really want your honest inputs.

@Dan: Thanks Dan. I'm looking forward to it.

Who knew such history would lie in such a serene scene! Beautiful sky and water light

I like this one, doug. Serenity, and detail in the shadow. :OD

such a peaceful looking place even if in history it was a place of defense because of violence! lovely shot!